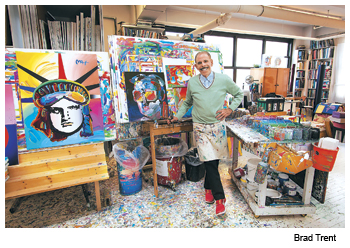 When I was a boy, it seemed like everywhere you looked, there was a colorful, bold, psychedelic piece of Peter Max art.

You could see it on TV, in Life magazine, on billboards and on album covers.

I told Max this the other day when I had an opportunity to speak with him via phone from his New York City studio. I don’t know if Max was thrilled about me telling him that I knew of and enjoyed his work when I was just a little one — I didn’t mean to make him feel old — but he did reply that he has always enjoyed his prominence in the art and pop culture worlds.

“It’s very nice to have my work recognized and I’ve always enjoyed talking with the media and having my work seen on TV,” he said.

Max will be in Beachwood Oct. 24-25 for an art show where his work will be available for viewing and purchase. The show is part of Beachwood’s 100th anniversary celebration.

Max has had a show once before in Beachwood. For this one, he’s gone the extra mile.

“I made a leaf for Beachwood,” he said. “It’s a beautiful, colorful leaf. This is very special to me.”

You may recall that, earlier this year, Beachwood had several local artists paint large, fiberglass beech tree leaves to celebrate its centennial.

Max was born in Berlin and lived in several places as a youngster, picking up a lot of influences.

“My father was in the import, export business,” he said. “I was born in Berlin and when I was one year old we moved to Shanghai. I lived in Tibet and many other countries.”

His artist mother encouraged Max’s artistic talents and when he grew up, he went on to study various forms of art before hitting upon the style for which he is most famous. It was a pop-art style that was in perfect sync with the late 1960s and early 70s.

He’s been in demand ever since, with his work adorning everything from a jet to promos for NBC TV’s “The Voice.”

“My work is in 2,200 museums throughout the world,” he said in a thick New York accent. “Can you believe that? And it’s nice to have people collecting my work.”

“Every day I wake up and do artwork and painting. It’s just something I have to do every day.”

Max has a staff of 55 people working at his studio, each handling a different aspect of his creations, from public relations, to making sure he gets where he needs to be.

“I’m enjoying life,” he said. “I paint during the week and I travel somewhere just about every weekend.”

Max is one of the most famous artists alive, and his work will be remembered for generations to come.