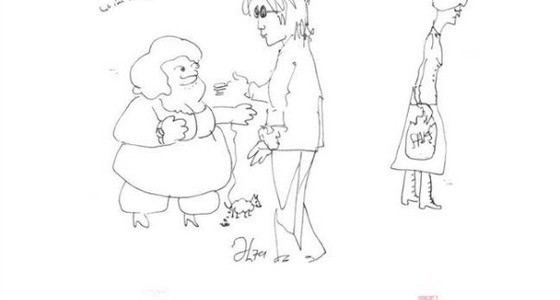 Houston Press: The Illustrated Side of John Lennon

John Lennon drew long before he was in the Beatles, becoming an accomplished student at one of the UK’s leading art schools. When the iconic band split up, Lennon put his musical activities aside for several years to spend time with his new family but kept right on drawing; maybe more than ever. If he had never even met Paul, George and Ringo, someone in an excellent position to know thinks Lennon would have done at least as well in the art world as he did in the recording studio.

“Most definitely,” says Lynne Clifford, curator of the traveling exhibit “The Art of John Lennon, which opens today at Houston’s Off the Wall Gallery.

“Yoko has sometimes said [that] I think he’ll someday probably be known equally well for his drawings as his music,” adds Clifford. “I mean, he was really a renaissance man — I know people throw that terminology around a lot, but he was a composer, a musician, a poet, an artist. I mean, there wasn’t anything that he couldn’t do.”

Clifford has worked for Ono since 1987. Before that, Lennon’s widow had come to the art marketing/publishing firm where Clifford was working and said she wanted to “share John’s art with the world.” When the terms of that agreement were up, Ono hired Clifford directly.

“She is 100 percent hands-on with everything that has to do with John’s artwork,” Clifford says of Ono. “She selects the images that are going to be created into the limited-edition prints [and] gives us background and storylines about where they were or what John was doing or thinking when he was drawing them. It’s a pleasure working for her.”

The exhibit now in Houston runs through Sunday and features 72 total pieces. (Off the Wall is adjacent to Nieman-Marcus in the Galleria.) According to Clifford, the collection on display here spans the years from 1964 — the height of Beatlemania — through the years shortly before John’s tragic death in 1980 at the hands of the assassin Mark David Chapman. He was just 40 years old.

According to Clifford, the Lennon archive contains drawings signed by the future Beatle as young as ages nine and ten years old, when she says he would draw famous characters in British history like Robin Hood or the warring Normans and Saxons. As a youth, he spent three years at the Liverpool College of Art and became famous for his spot-on caricatures of his classmates. Music temporarily won out when Lennon co-founded the Beatles in 1960, but he hardly put down his pen once the band got going.

“He would be at a board meeting and drawing art on the edges of the papers that he was reviewing,” says Clifford, who will be at Off the Wall Saturday and Sunday giving talks about the exhibition’s various pieces. “He never stopped drawing.”

Lennon was often thought of as the “sarcastic” Beatle — Paul was sweet, George quiet and Ringo, well, Ringo — but during our conversation, Clifford uses the word “whimsical” several times when describing his art. After the Beatles split, Clifford says Lennon enjoyed walking around New York’s Upper West Side, where encounters with starstruck fans would often inspire sketches like the one at the top of this article.

“Drawing for him was a way of coming out of himself,” notes Clifford. “He drew his whole life.”

His artwork flourished especially when he met Yoko and had Sean, she adds, a period where he retreated from public life to enjoy his new family. He would use art as a way of teaching his son, Clifford says – Lennon would draw a picture of an owl and ask, “What does this animal do?” (Except the owl happens to be in a car, and hooting is its way of honking the horn, she explains.)

“If you look through a number of the sketches, you’ll see that he’s constantly drawing her,” she adds. “The two of them are together, two as one, there’s no beginning [and] no end, the lines just compose into each other. When Sean was born, he brought Sean into those drawings, and he would be constantly drawing the happy life that he had.”

Technically, Clifford characterizes Lennon’s style as a combination of free drawing, illustration and caricature that was harder to create than he made it appear. Traveling in Japan with Ono in 1977, Clifford says Lennon taught himself the Japanese art of Sumi Ink, where the artists completes an entire drawing in one continuous line without lifting the pen from the paper.

“It’s very difficult,” Clifford says. Picasso and [Gustave] Moreau were famous for this kind of drawing, and quite a few art critics have compared his work to those two artists.”

Another famous example of Lennon’s artwork is his famous self-portrait (which appears on the cover of the soundtrack album to the 1988 documentary John Lennon Imagine), where his face is reduced to just his nose, hair and those famous glasses. Again, Clifford says it’s not as easy as it looks.

“That kind of simplicity, for people that are not familiar with art, [they] think it’s simple but it really isn’t,” she says. “It’s quite difficult to be able to do that.”

Sadly, Clifford says she never met Lennon in person or had a chance to see the Beatles in concert, but was “absolutely” a fan. (“That’s my generation there,” says the New Yorker.) But looking after his artwork and working with Ono for so many years, she can see firsthand the power of Lennon’s artwork — and not just his music — continues to exert over his fans.

“I mean, so many people, when we stage the exhibition it’s very interesting,” Clifford says. “You’ll see people walking through the room and one minute they’ll be laughing and the next minute they’ll be crying because they’re so moved by the works. And yet, you leave the exhibition with an overall feeling of elation, that even though his life was taken away from him, he enjoyed life so much.”