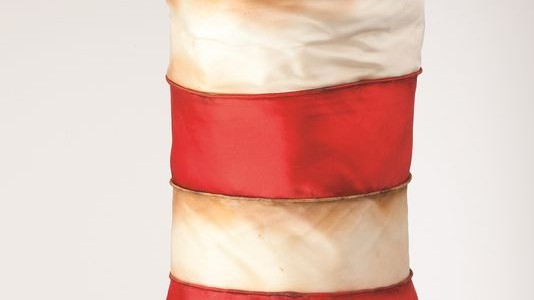 May 5, 2015Relevant CommunicationsClients in the News, news

That tall, red-and-white striped top hat donned by the Cat is his most famous.

But Theodor Seuss Geisel, better known by his pseudonym Dr. Seuss, created and amassed many hats, all with a rambunctiousness and palette fit for a man of unrivaled imagination. He began collecting hundreds of them in the 1930s and was inspired to write “The 500 Hats of Bartholomew Cubbins” in 1938.

Now, for the first time, Dr. Seuss’ widow, Audrey S. Geisel, is opening up a previously hidden hat collection and allowing a small exhibition to tour the nation. A two-week stop is set for The Art of Dr. Seuss Gallery, located next to the Sunglass Hut at Indianapolis’ Fashion Mall at Keystone.
Theodor Seuss Geisel in a purple plume hat, part of

“The Hats Off to Dr. Seuss!” is traveling in a retrofitted steamer trunk. The show highlights Dr. Seuss’ eye for otherworldly pizazz, featuring multilayered, multicolored hats bursting with plumage and adornments.

Hats were an important inspiration for Dr. Seuss, who died in 1991 at the age of 87 after penning more than 60 books. They figure prominently in many of his works, and you can see them on not just the Cat in the Hat but also Sam-I am and Mr. Brown. Although hats were still in vogue in his early age (Geisel was born in 1904), Dr. Seuss treated hats as costumes and as avenues for the imagination.

The exhibit will be housed at The Art of Dr. Seuss gallery, established last fall. It is one of five galleries in the country dedicated entirely to the author.

What: Hats Off to Dr. Seuss!