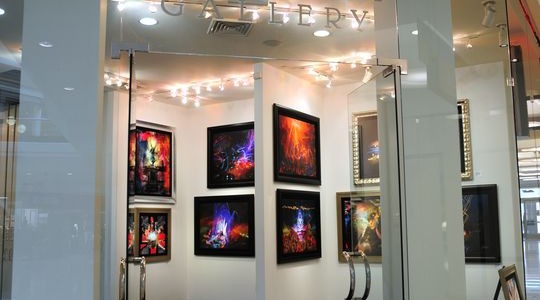 November 30, 2014Relevant CommunicationsClients in the News

Rick Allen’s artwork is moving from the concert stage and the recording studio to art gallery walls.

His latest exhibition, “Rick Allen: Angels and Icons,” is a collection of 45 mixed media originals drawing on photography, light art and painting on display at Wentworth Gallery at the Mall at Short Hills.

“I just think it’s different expressions, different ways that people can express themselves. Some people are more gifted in different areas, but I think at a certain point the whole thing kind of comes together.”

Allen, who lost his left arm in a 1984 car accident, discussed the prominent visual themes found throughout “Angels and Icons,” including the recurring presence of his right handprint.

“Many people have used handprints, but the handprint itself to me has become something very, very different,” Allen said. “A lot of what I do these days in terms of music or art, the techniques are born out of necessity. I rely so much on this poor hand of mine, you know what I mean?

“And then, the other thing that comes to mind are the angels. I’ve experienced so many angels on earth, from the couple that basically saved my life after my terrible accident. They just happened to be driving down the road.”

The artist and drummer will appear at the gallery in Short Hills from 5 to 8 p.m. on Saturday, Dec. 6, with a portion of the proceeds from each sale made during the appearance to be donated to Project Resiliency’s Warrior Resiliency Program, which works to address stress, anxiety and depression experienced by active duty military, veterans and their families. The program is sponsored by Allen’s charitable Raven Drum Foundation.

Allen said he was motivated to begin working with members of the military following a 2006 visit to the Walter Reed Army Medical Center in Washington, D.C. That visit, Allen said, helped him come to terms with the mental and emotional trauma he suffered as a result of his accident 30 years ago.

These days, Allen said, he gets as much out of Project Resiliency as the veterans that he works with.

“I’m doing all the same things that they’re doing, whether that’s good old fashioned sitting around and talking about what you’ve been through, or we do a lot of work with horses, which is very powerful work,” Allen said. “And then we’ll use ropes courses, which is climbing up these ridiculous heights but choosing to put yourself in danger and then listening to the dialogue that comes up.