November 18, 2013Relevant CommunicationsClients in the News

Photographer Harry Benson’s career spans six decades with work that includes some of the most influential figures in popular culture and politics, but it was a nearly missed chance to shoot the Beatles that launched his career. 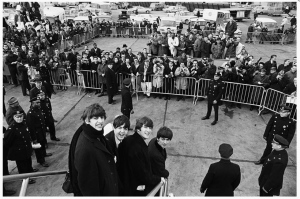 The Glasgow-born journalist got his start shooting weddings in 1949, but it wasn’t until 15 years later that his career skyrocketed.

“The Beatles were going to Paris and I was going to Africa to cover a news story,” Benson said in an interview with CBC News on Thursday.

“I took myself for a serious journalist and I didn’t want to cover a rock ‘n’ roll story,” he said.

Benson did, however, take the Beatles assignment at the insistence of an editor at the London Daily Express newspaper, and the timing could not have been better.

‘I was so close to not being there.’— Harry Benson

Shortly after he took a photo of the Fab Four mid-pillow fight in their Paris hotel room – the photograph he described as the defining image of his career – their hit song I Want To Hold Your Hand became the band’s first U.S. chart-topper and Benson was on the flight for their first trip to New York.

“Here I was, about to go to America with them, and I thought, God, I’m on the right story. They were terrific, and I was so close to not being there,” Benson said.

About 80 images spanning Benson’s decades-long career are on display and for sale at Toronto’s Liss Gallery until Dec. 16, 2013. (Evan Mitsui/CBC)

Along with capturing images of celebrities, Benson has photographed every U.S. president since Eisenhower and was with Robert Kennedy in his final minutes, photographing in the aftermath of his assassination in 1968.

When asked who was left on his “wish list” of people he would like to photograph, Benson named Russian President Vladimir Putin — and Toronto Mayor Rob Ford.

“Right now, there are no big guys left. No Charles DeGaulles. No Nixons or Kennedys. No big personalities, expect maybe the mayor of Toronto. He seems like a character,” Benson said.
The Beattles NYC 1964

The “look-back” of the century as The Beatles disembark at John F. Kennedy Airport in New York to begin their first American tour in 1964. (Harry Benson)

Benson’s photographs are found in the permanent collections of the Scottish National Portrait Gallery and the Smithsonian, but a retrospective featuring many of Benson’s iconic images has come to Toronto, where photos from his book Harry Benson: The Beatles on the Road, 1964-1966 and of other subjects will be on display and for sale.

Limited-edition signed prints — ranging from $35,000 to a couple of hundred dollars — are hanging at Liss Gallery in Toronto’s Yorkville neighbourhood from Nov. 16 to Dec. 16.