August 7, 2014Relevant CommunicationsClients in the News

Nobility of Time
Dalí’s soft watch is both draped against and supported by the remains of a tree whose trunks sprout new life and whose roots entwine a stone. The terminology, “the crown of a watch” usually indicates a mechanical device which allows us to set the hands and wind the timepiece. Time, however, according to a Dalínian watch, is changeless and cannot be set, and the watch itself has no internal power or motion. Given this absence of movement, the crown in this case is interpreted by the artist as a royal crown which adorns the watch, identifies time’s mastery over human beings rather than its utility to him. His majesty is attended by two reoccurring, fantastical Dalínian symbols: a contemplative angel, and a woman draped in shawls look on. Time reigns supreme over both art and reality. 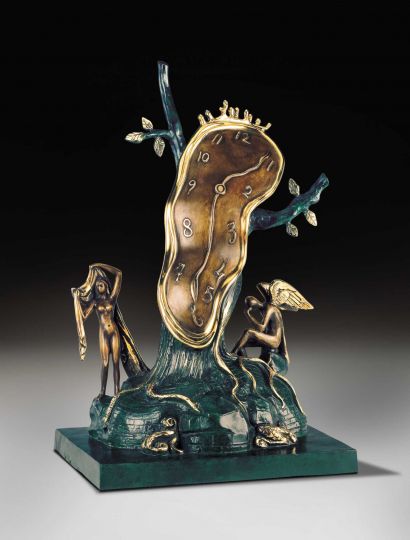