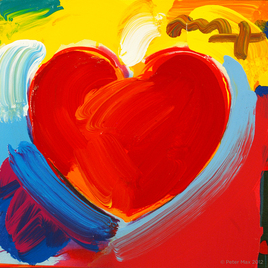 January 29, 2015Relevant CommunicationsClients in the News

First, let me preface this brief interview by saying that I don’t typically cover art, but I do enjoy it. Which is why I recently jumped at the chance to interview America’s most popular living Artist, Peter Max.

Known for his psychedelic iconic Pop Art designs commemorating everything from Woodstock to Lady Liberty, he has painted for five U.S. Presidents and his art is on display in Museums, Presidential Libraries and in U.S. Embassies across the globe. He has been the Official Artist of five NFL Super Bowls, the 2006 Olympics, the World Cup U.S.A., the World Series (Yankees vs. Mets), the U.S. Open, the Indy 500, the N.Y.C. Marathon and the Kentucky Derby.

He’s even painted a Boeing 707 and the hull of Norwegian cruise ships (which I previously got to see here), thus, it’s easy to say that Peter Max and his vibrant colors have become part of the fabric of contemporary culture. Personally, I find his vividly colored pieces to be optimistic, and I like how they can always make me smile and lift my mood.

During my conversation with him, the artist said that even at age 77, he still gets an adrenaline rush as he nears his studio in New York. I felt that same feeling and inspiration when talking to Mr. Max on the phone.

Fortunately, he was as friendly and humble as he appears in his on-camera interviews. He started off by asking where I was located and how long I’ve been writing. He then provided me with some background on how he got started by taking private lessons as a child and going to art school. Although born in Berlin, Germany, his family moved to Shanghai, China when he was very little for 10 years until they moved to Israel and later New York, where he lives ’til this day.

How do you choose the pop icons and objects that you feature?

Peter Max: “When I put my brush to canvas I never know what I’m going to paint. It’s like when you’re walking down the street with your hands in your pockets, humming a tune, you don’t know what you’ll be humming five minutes from now.”

Your work has appeared in The Hermitage to the Louvre, what’s been your favorite appearance?

Peter Max: “You know what I just learned two weeks ago? I thought my work was in probably 40 museums or so, but I was just told that my work is in 2,200 museums worldwide from Brazil to Singapore. It’s mind-boggling.”

How often do you still paint and create art?

Peter Max: “Seven days a week, I’m always drawing, doodling or painting whether I’m in the studio or on a plane.”

I’m hoping to meet him in-person this Saturday during one of his gallery appearances in Naples, Florida.

As part of the Road Show Company, a never-before-seen collection of Max’s exquisite paintings will be on exhibition and available for acquisition at a presentation at The Mercato in Naples.

Peter Max will also make two complimentary, and open to the public appearances at the pop-up gallery, but RSVPs are required. The two scheduled Meet the Artist receptions are on Saturday, January 24, 2015 from 6-9 p.m. and Sunday, January 25, 2015 from 2-5 p.m. The exhibit itself is open now, and will be on display until the 25th. For more meet the artist opportunities in Ft. Lauderdale, FL to Short Hills, NJ, you can find the full list here.

This carefully curated collection is a museum-like retrospective of Max’s works. This exhibit features his iconic and best-known pieces as well, among them “Statue of Liberty”, Max’s famous “Flag” pieces, “Umbrella Man” and the prestigious “Cosmic Runner.” All work in this exhibit is available for acquisition.