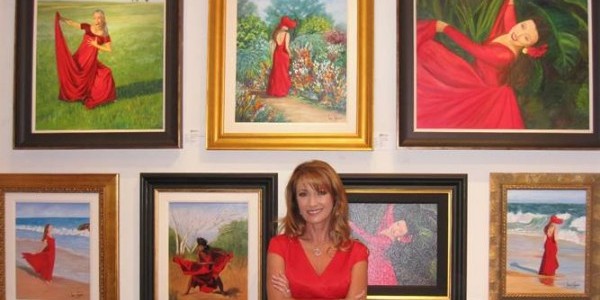 ART ON EXHIBITION AND AVAILABLE FOR ACQUISITION WITH SPECIAL APPEARANCES BY MS. SEYMOUR

Raleigh, North Carolina – January, 2015 – An impressive collection of original artwork by EMMY AND GOLDEN GLOBE award-winning actress JANE SEYMOUR will be on exhibition and available for acquisition at a premiere presentation at Raleigh’s distinguished The Mahler Fine Art. www.themahlerfineart.com.

Meet Jane Seymour in person during several artist appearances: Saturday, February 28th, 2015 from 6:00 pm – 8pm and Sunday, March 1st from 2:00 pm – 4:00 pm. There will be a special Children’s Event on Saturday, February 28th from 11:00 am until Noon. This is a once-in-a-lifetime opportunity to meet Jane Seymour and experience her extraordinary art.

A multiple Emmy® and Golden Globe® winner, recipient of the Officer of the British Empire (OBE) in the year 2000, which was bestowed upon her by Queen Elizabeth II at Buckingham Palace, Jane Seymour has proven her talents in virtually all media, the Broadway stage, motion pictures and television. Her love of art and color has led to her great success as a painter in watercolors and oils and as a designer.

Seymour’s past films include the James Bond movie Live and Let Die, the cult classic Somewhere in Time, and the comedy smash Wedding Crashers. Her television credits include the Emmy® Award winning performance in Onassis: The Richest Man in the World as Maria Callas, East of Eden for which she was awarded a Golden Globe®, the mini-series War and Remembrance and her Golden Globe® winning role as “Dr. Quinn” on Dr. Quinn Medicine Woman which ran for six seasons.

Daughter of a British obstetrician and his Dutch wife, Jane was born in Hillingdon, England and raised in Wimbledon. She began training in dance at an early age, and was just thirteen when she made her professional debut with the London Festival Ballet. That same year, she entered the Arts Educational Trust for dance, music and theatre training and danced with the visiting Kirov Ballet at Covent Garden.

In addition to acting, Jane has written over 10 books including her most recent, Open Hearts The Wave and Open Hearts Family, along with Among Angels, Open Hearts, Making Yourself At Home, and Remarkable Changes. As well, she has launched Jane Seymour Designs, a national lifestyle brand inspired by her homes, art and family-centered lifestyle.

When she is not acting, writing or designing, Seymour can be found in her painting studio. With a thriving career as an artist and her own art gallery in Los Angeles, she has exhibited in numerous galleries and venues across North America. Over the past twenty-three years she has created an intimate world of delicate watercolors, colorful vibrant oil paintings, pastels and bronze sculptures and has accepted select private commissions. She continues to reach new artistic levels by continually developing her technique, style and subject matter.

Her art also serves as inspiration for Open Hearts by Jane Seymour®, a jewelry line for Kay® Jewelers. Inspired by Seymour’s original paintings of two hearts connected and open at either end, the exclusive designs symbolize that love has no boundaries and flows unconditionally. The open heart design reminds us that if we keep our hearts open, love will always find its way in. Seymour’s Open Heart philosophy reflects her mother’s advice that only when you keep your heart open can you best give and receive love. It is also the driving force behind www.keepanopenheart.com, which provides an online forum for people to discuss how living with an open heart has changed their lives.

Seymour is involved in many philanthropic causes including Childhelp, American Red Cross, City Hearts and Camp Soaring Eagle. In addition to the charitable work that Seymour does with these notable organizations, in 2010 she launched the Open Hearts Foundation.