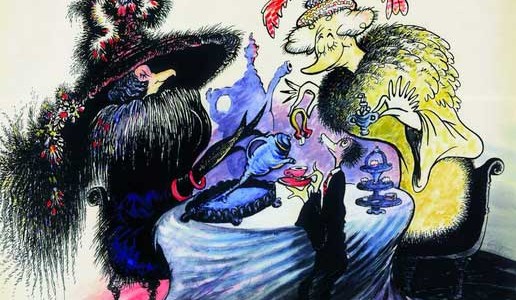 By Kimberley Singletary
Special to The Advocate

The sun did not shine.
it was too wet to play.
so we sat in the house
all that cold, cold, wet day.

In the classic children’s book, “The Cat in the Hat,” a pair of bored kids are entertained, and then alarmed, by the sudden arrival of a mischievous cat. The talking prankster famously possesses a tall, striped hat … and it appears he wasn’t the only one.

It turns out legendary children’s author Theodore Seuss Geisel, who wrote under the name Dr. Seuss, had his own oddball collection of headwear — a source of inspiration that is finally coming to light through a nationally touring exhibition called “Hats Off to Dr. Seuss!”

The exhibition will be on display at the AKG Gallery in New Orleans, from Jan. 15 through Feb. 14, featuring a unique collection of hats and never-before-seen artwork by Seuss. Admission is free.

“This whole thing started when I was at the Dr. Seuss estate in La Jolla, California, one day with his widow, Audrey,” said Bill Dreyer, director and curator of The Art of Dr. Seuss. “We were standing in this library of floor-to-ceiling book shelves and she asked me, ‘Bill, do you want to see the hat closet?’

“She then walked over to one of the walls, and it was like something out of a James Bond movie. All of a sudden the wall moved and exposed a hidden room filled with several hundred hats.”

Dreyer learned that Seuss had been a collector of hats since the 1930s. According to his sister, Marnie, the author’s headwear collection often inspired his writings.

Such was the case, she said, with the second of the 44 children’s books he wrote, “The 500 Hats of Bartholomew Cubbins,” which celebrated its 75th anniversary in 2013 with the premiere of the Hats Off to Dr. Seuss! exhibition at the New York Library.

In that book, a peasant named Bartholomew is ordered by the king to take off his hat. But as he takes it off, another hat is revealed beneath it — and another, and another.

“Far beyond their functionality, hats were the accent — the exclamation point — on a person’s behavior,” explains the exhibit’s website. “They could entertain, delight and embellish, even tease and taunt, but most of all, hats helped Dr. Seuss deliver a world of life-changing inspiration.”

Bartholomew Cubbins’ stack of caps wasn’t that far-fetched for the hat-loving author.

“Originally there were almost 500 hats in his collection,” Dreyer said. “But only around 150 are still in existence. Of those, I chose 26 and have packaged them in a custom steamer trunk.”

It almost goes without saying that the collection includes what is possibly the most iconic hat ever, a red and white number belonging to a certain rambunctious feline.

The second part of the exhibition exposes another Seuss secret.

“Every night, from when he was in his 20s I think, Seuss would stay up painting,” Dreyer says. “He loved to paint, but he rarely ever showed his paintings to anyone, telling his wife she could do that when he was gone.”

To honor his wishes, while still protecting the originals, Audrey Geisel has agreed to share a series of “Secret Art” — authorized estate editions adapted and reproduced from her husband’s original paintings, drawings and sculpture.

In addition to the results of late-night painting sessions, visitors will also see sculptures, including a life-size bronze of the Cat in the Hat, and what Dreyer considers the gem of the collection, a series of what he calls “unorthodox taxidermy” — three-dimensional Seuss creatures created from original sculptures Theodore Geisel began as early as the 1930s.

The exhibit, Dreyer says, has something to delight Seuss fans of all ages, while also offering a more complete vision of this legendary figure.

“Seuss had another side to his artistic career,” he says. “These are painting and sculptures of such an elaborate imagination that stretch well beyond all pre-conceived notions of the good doctor.”

“Then he shut up the things in the box with the hook.

and the cat went away with a sad kind of look.”