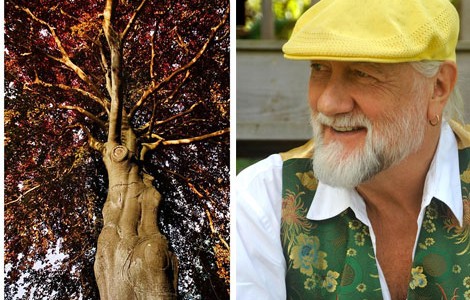 Mick Fleetwood, founding drummer for Fleetwood Mac, has long maintained he’s not a technician behind the drum kit, that he plays by feel. That’s why his drum pattern on the classic rocker Go Your Own Way is just this side of oft-kilter and yet definitive.

The same applies to his lesser-known side project: photography. Fleetwood’s photographs, taken in Maui where he lives when he’s not on the road with his reunited band, capture scenes of nature and are on exhibit through Dec. Sunday at Wentworth Galleries in Fort Lauderdale.

Fleetwood drops by the gallery Thursday evening for a VIP artist’s reception for his Reflections: The Mick Fleetwood Collection, a day before Fleetwood Mac performs at Sunrise’s BB&T Center.

“I thought it was a way of self-revealing,” Fleetwood, 67, said of photography. “Can I allow myself to be creative and not get all intellectual about it? And that’s how I began enjoying it. For me, it’s like creating a little painting, and I don’t paint, but I can take a picture and try and get it right and the light right.”

His two worlds, the loudness of rock and roll and the quiet solitude of photography, actually merge, he insists.

“I think it complements really well. It is different, but it’s also got major similarities, believe it or not,” he said. “One is quite bombastic and borderline vicious, but there is an absolute behind it. When I’m really enjoying playing I’m in what I would call the zone. You can’t make it into the zone as much as you would like, but when it happens you cherish it. The part I like when you take a picture is that you win some and you lose some. But you do feel good when you are in the zone. There is a version of me being in the zone with other players and having an exclusive time in your own zone. This was something I had never really experienced. … I didn’t realize that until about 25 years ago.”

Great photos are sometimes the result of happy accidents — the light shining just so, the shadows caressing a winding road in a magical way — but Fleetwood says he puts a bit more effort into his shots.

“I put a modicum of thought into it, which is why I started taking pictures like this. It’s a selfish need. I’ve had a little journey behind that picture. Not all come like that, but I like knowing I’m going back to a place I saw out my car window in Maui at 5 in the afternoon that I’ve never seen look like that, and that becomes a little adventure.”