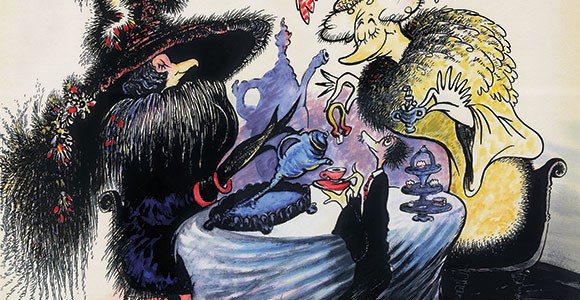 The fantastical world created within the corridors of Theodor Geisel’s mind is inescapable to anyone that grew up with his books, penned under the iconic pseudonym Dr. Seuss. While as children we may have feared a visit to the doctor, imagining the world of pain that would be inflicted by a horrible, needle-wielding monster, Dr. Seuss served as a wonderfully wacky respite. Here’s a doctor whose sole purpose was to tickle our funny bone with his wit and colorful imagination. He was part of most children’s lives and his legacy continues to live on throughout the world.

His legacy is especially felt in one small corner the world — San Diego. Around 1953, Geisel and his first wife Helen moved to La Jolla, an affluent beachside area of the city. There, he wrote many of his most beloved and popular stories, including “Horton Hears a Who!,” “The Cat in the Hat,” “How the Grinch Stole Christmas” and “Green Eggs and Ham.” He spent decades in San Diego, until he passed away in 1991.

Within each of his book’s illustrations, you can see pieces of the place he made his home. Characters with wild, palm tree-like manes, vibrant birds, trees that resemble San Diego’s native acacia trees and bright landscapes fill the pages of his famed children’s books. Any San Diegan can easily recognize their city within those pages.

In return, San Diego pays homage to Geisel year-round in the form of an eccentrically-designed library in the heart of the UC San Diego campus that bears his name. Geisel Library doesn’t just serve as a place of study for students, it also is home to a large special collection of priceless manuscripts, imagery and advertisements that featured Geisel’s illustrations. There’s also a yearly performance of “How the Grinch Stole Christmas” performed at the Old Globe Theatre in the famous Balboa Park.

While we know Dr. Seuss for his cherished children’s books, Theodor Geisel was also a visual artist who spent a lot of time creating what he called his “midnight paintings.”

“He would work during the day, and at night the one thing he enjoyed doing more than anything was to relax by painting,” says Bill Dreyer, curator of the Seussian collection, The Art of Dr. Seuss.

Dreyer has teamed up with the San Diego History Center is for a special exhibition dedicated to Geisel’s personal art work. “Ingenious! The World of Dr. Seuss” features high-quality copies of his reproductions early works, paintings, sculptures, illustrations and never-before-seen work that highlight Geisel’s creative genius and unrelenting sense of whimsy. Unfortunately, original copies are never shown in public as per the request of his widow, Audrey. Still, the exhibition is fascinating and familiar to all those who know Geisel as Seuss but would love to get to know the man.

“What is fascinating about this exhibition is that we’re highlighting a side of Dr. Seuss very few people are familiar with,” says Dreyer. “Everyone is familiar with his children’s books, but he also created a body of art work that has rarely, if ever, been exhibited to the public.”

The exhibition offers a glimpse into Theodor Geisel as a person and artist. His humor is evident in many of the pieces. One, for example, features a bird woman lying in a coffin as she is talking on a telephone. The caption reads, “I’d love to go to the party but I’m absolutely dead.”

“The imagery we see in these paintings stretches beyond all pre-conceived notions of Dr. Seuss,” says Dreyer. “In some cases it’s a little risqué and has a bit of an adult humor and wit to it.”

That same haughty bird woman serves as a vehicle for social commentary in a number of other pieces by Geisel. Dreyer explains that the bird woman mocks the arrogant upper class female socialites Geisel often encountered in La Jolla. The delightfully good natured ribbing was classic Geisel. The character is seen in 11 of Geisel’s paintings, six of them are on display at “Ingenious!”

He also pays homage to San Diego in other pieces of art. Geisel’s home studio had a 180-degree view of the Pacific Ocean. Three of his midnight paintings appear to feature that view: “Firebird,” “Freebird” and “I Dreamed I was a Doorman at the Hotel Del Coronado.”

“You get the sense that his artworks were inspired by his view,” says Dreyer, who included a photo of Geisel in front of his window in the exhibition to make the connection. “They have that San Diego look and feel. A lot of his imagery and landscapes have a San Diego feeling.”

With this exhibition, fans of Dr. Seuss are given the privilege to meet Theodor Geisel and the city he made his home in a way that feels personal and intimate. His personality shines through, and you’ll be sure to walk away with a greater understanding of Geisel as a wholly unique visual artist. “Ingenious!” is on view through the end of 2015.